AMP is for a Select Few

Google stated that, “for many, reading on the mobile web is a slow, clunky, and frustrating experience – but it doesn’t have to be that way. The Accelerated Mobile Pages (AMP) Project is an open-source initiative that embodies the vision that publishers can create mobile-optimized content once and have it load instantly everywhere.”

So, is AMP a requirement? Everybody wants faster-loading pages, right? Is it for everyone?

At its essence, AMP is basically a stripped-down form of HTML – one that does not support forms and would make conversions impossible. It requires you to use a streamlined version of CSS; and JavaScript, which would be the ideal language, is not allowed at all. You have to use an off-the-shelf JavaScript library offered by Google, which results in things like lazy loading.

There are many ways to achieve the same results as AMP while preserving an engaging user experience. It’s important to keep in mind that AMP is simply a means to an end. The chief goal is to make web pages as fast as possible and deliver relevant content to users in the right context. Google’s choice to select AMP as a preferred method of serving content is essentially choosing a code framework, rather than the correct paradigm mentioned above.

Who Benefits from AMP?

AMP is really for publishers and static web pages. For instance, if The Wall Street Journal writes an article about the stock market that will be accessed around the English-speaking world, they will want that article to be the same wherever it is published. Ads, though, might slow down their load. If they adhere to AMP, the page will load much faster everywhere – but with fewer ads. So it’s a trade-off; but one they may be willing to make if people previously abandoned their articles because they took too long to load on a mobile device.

On the other hand, businesses that rely on lead generation will be negatively affected by AMP because it does not support web forms. And businesses that would like to give their users a rich online experience with videos and other unique features will lose out as well.

How Does AMP Affect Page Speed?

For years, Google has discussed page speed as an existing ranking factor. Since AMP improves load time and page speed, publishers that have AMP pages will possibly be prioritized in search results. Google will not confirm this explicitly, of course, but it did reiterate the importance of page speed. As with any element of Google’s algorithms, there is some debate over the weight given to site speed. Is it used as a tiebreaker between two otherwise equally ranked pages? Or is it a quantifiable, calculated field? Either way, it’s just one of the 200 elements considered by Google’s algorithms; and if your page does well on a majority of other elements, then chances are it will be found.

For some coders, AMP is likely to be the most accessible, easiest way to improve page load times. Interestingly, as of yesterday, Google wasn’t saying how they would label an AMP page. Today, though, it shows that they are indeed using AMP and a symbol to indicate AMP pages. 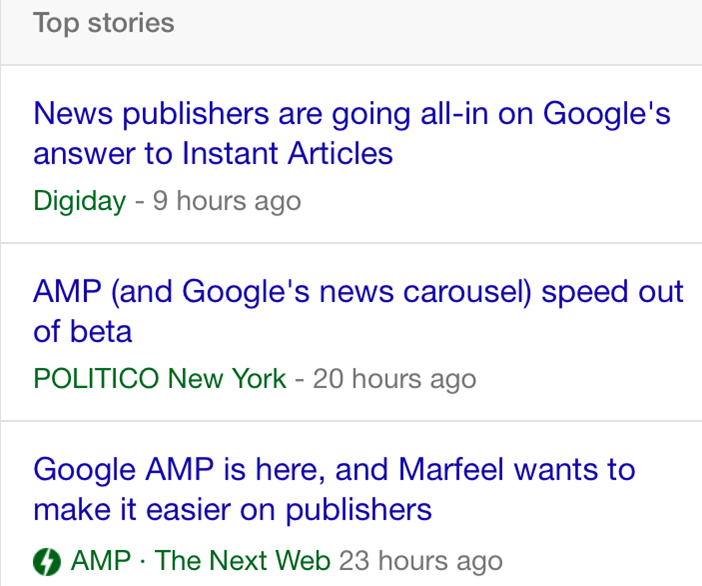 Should You Use AMP? What Are Your Options?

Google has made it clear that AMP isn’t the only way to speed up mobile pages. The tech and SEO community has echoed this sentiment: if you know what you’re doing, there are better ways to keep your rich content (e.g., photos forms) and still load fast.

However, there are many things you can do to decrease load time while maintaining functionality. Here are just a few:

You don’t need AMP. If you focus on the performance of your site, it isn’t required. Of course, from a UX standpoint, fast load times are essential. Some reports suggest that your visitors will bounce if the visible area takes more than one-third of a second to load. But if your user experience depends on functionalities that aren’t supported by AMP, then load time isn’t your only important consideration.

Why Now for AMP?

If you look deeper into Google’s mobile presence, you’ll see some issues. One is the amount of time that end users spend on apps. If Google promotes an article that takes someone to Facebook, it loses out on a chance to serve an ad. Facebook has its Instant Articles product, which gets eyeballs on publishers’ content instantly with virtually no load time; and Google is probably losing some visits because of that. Google wants to keep eyeballs on web search and web pages instead of on apps.

A key goal of the push for responsive web design, and addressing the unique needs of mobile users, is to provide the right experience and to engage the user with key content. AMP does not promise this. A consistent user experience becomes an especially critical concern when it comes to websites whose chief goal is to convert users against a business.

Much like the mobile-specific pages that were in vogue years ago, which had a separate codebase from the desktop website, AMP separates the mobile experience from the desktop experience rather than providing a consistent experience between the two. If we look at the numbers coming in around user engagement and behavior on conversion-focused websites, indeed the need to provide engaging content quickly is more important than ever. Video backgrounds, haptic feedback, and meaningful interactions with movement, for instance, have yielded conversion rate increases by as much as 800%. To view this as unachievable based on a code framework enforcing these limitations seems to go against the grain. Even Google has made available to web and app developers its Material Design framework, which emphasizes richness in interactions, including JavaScript.

At G5, we’re always working on and reworking our coding practices for site speed for both user experience and search engine algorithms. We are looking forward to coming back soon to talk about http2!