What’s the partnership buzz about?

In its February earnings call, Twitter CEO Dick Costolo officially confirmed the company’s partnership with Google is back on. This is the first official partnership since the relationship was nixed back in 2011. What this means is that Google will once again have access to the Twitter “firehose” of content being shared in the form of 140-character tweets every second of every day.

It’s important to note that this is a re-hashing of a relationship that existed before Twitter was so well known (or a publicly-traded company). Twitter content showed up in Google’s search results as far back as 2011, before Twitter and Google amicably split ways.

What does the partnership really mean?

Simply put, Twitter is allowing Google direct access to all content being shared on the platform. Though no specifics have been shared, and no comment from Google has arrived, the assumption is that the search giant will have direct access to all tweets to crawl and index for relevant information.

The full stream of content has been referred to as the Twitter “firehose” due to the massive amount of content shared on the site. The sheer volume of all this content made it inefficient for Google to try to crawl all of the messaging coming through on Twitter without proprietary access to the platform’s system. Now that the partnership is back on, Google will have access to content shared on Twitter to deliver to searchers when indexing results.

Why do these two companies need one another?

Google, like any company, has customers to serve. In this case, these are searchers. “Google” did not become a verb thanks to poor search results delivery. Google knows that the changing web requires unique partnerships with media channels like Twitter to maintain its dominance as the go-to search engine ahead of Bing, Yahoo and other platforms. The driving force behind Google Search is to give its visitors the most relevant content related to their query. Twitter’s platform is full of great and timely content that can often help deliver the most relevant results for searchers.

Twitter needs Google to help establish visibility for non-platform users. Much of Twitter’s focus over the past few months has been to convert a portion of their 500 million logged-out visitors to create an account. By allowing their content to show up more programmatically in a Google search, Twitter will be looking to drive more engagement and user sign ups for their service where they can deliver advertising to drive revenue and please shareholders (and Wall Street). More exposure for Twitter content means more clicks to the platform, which means more opportunities to get eyes on advertising from brand partners.

How can companies effectively leverage this change?

Sharing high-quality, relevant and timely content has always been the goal for companies on Twitter. This channel-philosophy is only emphasized by Google’s access to Twitter’s content stream. Sharing on the platform should be motivated by timeliness, audience preferences and adding value to a broader conversation. As tweets continue to show up in Google’s search results, these foundational principles of sharing on the platform will be directly considered by Google’s algorithm as it delivers results. Sharing quality content at the right time will not only drive higher value user engagement, but it is more likely to show up on the search engine results page (SERP) for relevant searches.

The best way to think about this change is to consider that there are two different venues for your target audience to engage with your Twitter content: natively in the Twitter platform (including third party social media management systems like Hootsuite or Buffer) and, with this update, in Google’s search engine results page. This means sharing content regularly and on-topic (especially local topics for your locations) will become increasingly important. 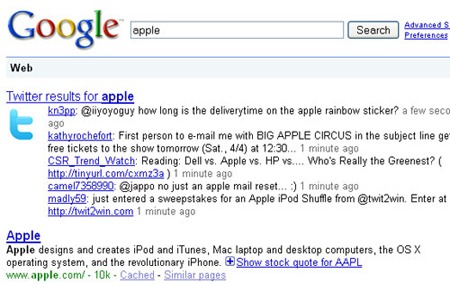 What if your company doesn’t have a Twitter presence?

As social platforms like Facebook, Twitter, Instagram, Google+, and others continue to emerge as highly trafficked content-sharing machines, it will become increasingly important for brands to have a presence on each of them. User behaviors are changing. It is not only encouraged to have a content strategy for each relevant platform, it’s becoming expected by consumers who visit these channels daily. Start by establishing which channels you can effectively and consistently manage, then expand your presence as your company bandwidth and knowledge base grow.

There’s nothing wrong with getting active on Twitter now, but it’s important to establish a voice, content plan and customer service strategy before diving in to sharing. The best advice is to grab your Twitter handle (username) and spend some time listening; understand how your target audience uses Twitter. After you’ve developed this understanding, begin contributing to relevant conversations by creating valuable content (white papers, blog posts, infographics, images, customer service, etc.) Combine this strategy with paid media (native advertising) and you’ll be on your way to driving leads and conversions on one of social media’s most important platform